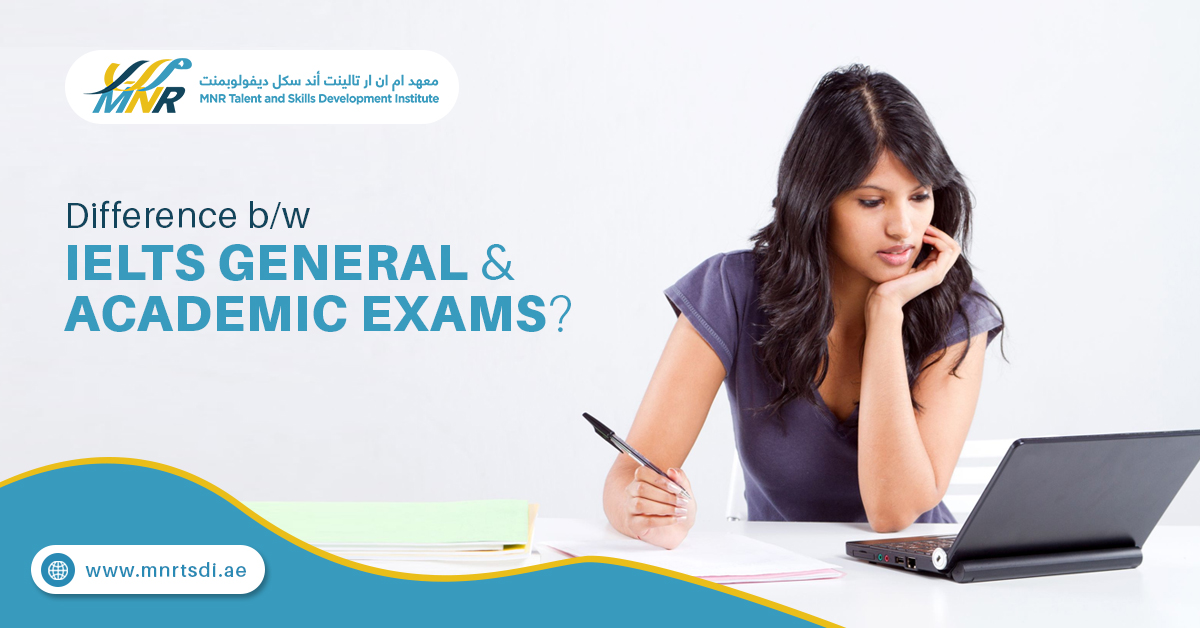 IELTS may turn into a nightmare for the aspirants, who don’t have basic English language education or those who lack adequate proficiency in the language. Nevertheless, one can qualify for the exam by pursuing meticulous IELTS training and IELTS courses offered by reputed institutions. The IELTS has two different types of exams depending on the purpose for which the candidate is seeking the certification. The two IELTS exams are IELTS General and IELTS Academic.

What is the IELTS General Exam?

The IELTS General exam is conducted for evaluating the English language proficiency of a person applying for migration to countries including Canada, Australia, and New Zealand. The examiners would examine the general understanding and communication capabilities of the individual in English during the IELTS (General) exam. It is suggested to undergo IELTS training at an established coaching centre offering IELTS courses. The coaching would enhance the candidate’s capabilities and infuse confidence in him or her. The IELTS General exam is applicable for those applying for educational courses, below degree, in the relevant countries.

What is the IELTS Academic Exam?

The students from non-English speaking countries, opting for higher education, including professional degree, in the countries including the UK, Australia, and Canada would have to qualify IELTS academic test. The IELTS course would enable the aspirants to an in-depth understanding of the language and help them perform during the IELTS exam. The test would ascertain whether the student is ready for commencing the course in English medium. Since the degree level (or above) courses will have complicated topics, the students must have a thorough understanding of the English language. For him or her to score well and clear the exams. The IELTS training and IELTS course will help the students to achieve great results.

What are the Differences between IELTS General and IELTS Academic Exams?

IELTS Speaking Test – The speaking test is about 14 minutes in duration. The candidate will be discussing a familiar topic with the examiner. The candidate’s experience of repeated interview practices during IELTS training will help him or her to perform well during this test. The test is the same for both academic and general.

IELTS Listening Test – Consisting of 04 sections, with 10 questions each, the listening test is of about 30 minutes. This section of the IELTS exam is the same for both general and academic.

IELTS Reading Test – This test differs in the pattern for general and academic. Therefore, IELTS training would also be according to the exam you plan to attend.

General – The general reading test consists of 3 sections for a total duration of 60 minutes. The first section will have two, three or several short texts. There will be two texts in the second and one long text in the third.

Academic – In the duration of 60 minutes the candidate will be provided with three long tests for the Academic Reading Test.

General – Task 1 will contain writing a letter of 150 words and task 2 will be a short essay of 250 words on the given topic.

Academic – In task 1, the aspirant will have to describe the chart, diagram or table provided (150 words). Task 2 will be a short essay of 250 words on the given topic.

The above-mentioned is the pattern of IELTS general and academic exams. A thorough preparation and IELTS course is essential for a candidate to attend the exam confidently and clear it without any issues. The reputed IELTS training centres will have experienced teachers for preparing the aspirants for the IELTS exam. If you are thinking of attending the IELTS exam, join the IELTS training today.

We are glad that you preferred to contact us. Please fill our short form and one of our friendly team members will contact you back.